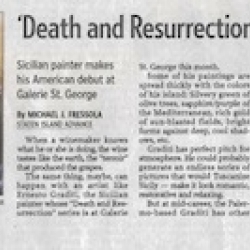 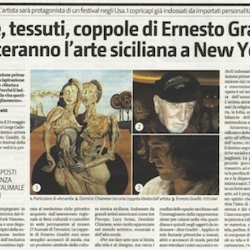 ABOUT WORKS OF ERNESTO GRADITI

Ernst H. Gombrich maintained that art in itself doesn’t exist, instead there are thee artists. Real men that produce objects, develop ideas in the form of images and figures. Lines, shapes, colors able to give birth to moods and emotions.The history of art is therefore the history of the ideas and visions of the world through the stories that these special items make. They acquire independent existence after the stage of development and artistic production, such as “masterpieces” or simply witnesses of the time of culture. In fact they outlive their creators, continuing to produce narratives, emotions, admiration or simple indifference, and also contributes to determine the quality of physical contexts to which they belong or which give life. They are special “material” full of immaterial, consisting of a part “seen” and another one that you feel, or even “not be seen”, or paradoxically “it is seen closing her eyes” to open a symbolic dimensions , iconography of sociological and / or spiritual. Is this, more properly, the way of aesthetic perception, which determines thrills through the human senses, whereas, on the border between the visible and the invisible, builds the distinction between the “cultural heritage” and the authentic “artwork”. The artwork becomes such when, among its component materials, spiritual and symbolic dimension prevails over that material, perceptive and documentary. Among the distinctive features of the artwork must be remembered that summarized by W. Tatarkiewicz , in “History of six ideas” -that produce beauty -that reproduce aspects of reality-that shape things;- that give expression;- that process and return creativity.

It was necessary for the understanding of Art reconnect these wires teachers, to introduce some note and comment on the work of Ernesto Graditi, which in these categories-constant of the sustainability of artistic creativity, can fully be understood. His pictorial work, which has many masters, but that is essentially self-taught, outlines characters with a strong personality and sharp graphics rendering, in possession of the ancient certainties of the trade. These characters stand out by comparison of the apparent banality-performance of such contemporary conceptual art. Return with constancy in his research the human figure and the image of the Man-Hero, the Fighter and the Ancient Knight in revolt, often against their own time, the hypocrisy and false values. Ours is a time that was even capable of producing works “academic” in the name of transgression to the program, a totalitarian “new rule”: “there are no more rules” or “if everyone is for himself”. This time is leaving images and confused form, which also speak of all of us, of things profoundly unreal, paradoxical, paranoid visions, corrosive, free ugly, vulgar, violent, irreverent, profane, who are at the center of Chaos.

In the art of Ernesto Graditi is instinctively present the painful elaboration of figurative arcane and mysterious depths untouched by the avant-garde masters, especially in his readings of disturbing surrealism. Prevails, however, the artistic will of the redemption of the human form, the critical point of re-starting after stasis, to re-compose heroically after lacerations, to return to give way to his destiny, after crushing, to re-enter the landscape of human history, after the absurdity of ‘being “thrown” into post-human horizons, cold and larval, nihilism done in the name of the supposed “death of God”. The trait that characterizes the work of figurative Ernesto Graditi can be summarized briefly in the attempt, in progress at this stage of its maturity, to return to drawing and painting as of the old masters: technically difficult to implement and easy to understand, for the story of the history of ideas or, on the contrary of such pseudo-contemporary art, easy to do when not reduced to pure mental rumination, and difficult to understand, in the few cases enlightened and meaningful. In this, Graditi becomes artist of “resistance” to the line carrying the art of the ’900, who declined to talk about the truth and meaning in the throes of iconoclastic fury destructive of values and beliefs. We believe that this already, alone, is worth to Ernesto Graditi, and to all those like him follow the difficult path of painful “back to reality”, the merit to insert one of the protagonists of contemporary art in its traditional meaning, involving the elaboration of ideas, vision and inner struggle, the ability of exploration and innovation, craft, not simply aimed at generic conceptual “creativity” of assemblies for complacent art dealers, but essentially the product-work of art. Everything in the sad scene of our era, characterized by the nihilistic part of its reduction to mere “aesthetically pleasing” or to the extremist position of art theories and practice, that provide for the relativistic Nothing, the absence of the same work of art .

In the pictorial cycles of Ernesto Graditi you perceive a “secret exposed in evidence,” in the words of E. Zolla: that through the eyes on artwork gives the possibility of access to knowledge, self elitist, in this case open to everyone. Because the ability to see is the beginning of all knowledge that is of extreme importance for the understanding of the Sicilian culture by Ernesto Graditi, intimately linked to his ancestral “Normannesimo” which becomes the founding myth of his daily life as an artist, with ancient roots. Among the difficulties that we face in understanding of the crisis of our time, one of the most devastating is the right and critical approach to the impressive amount of images that are administered by the society. Yet we immediately realize that what comes to us, is very often is of poor quality, true hymn to the aesthetic degradation. One is reminded of what sustained C.S. Lewis, that is that the artist is a window on the world, which should enable us to lean out to understand: if, when we come out, we don’t see the world but only the window, or even see the Void, this means that it was poorly built or that the vision is used instrumentally to disorient the chaos of horizons meaningless. The artistic work of Ernesto Graditi is located substantially at the junction of this radical choice: it is unacceptable the defense often made of modern art, that is to say that it would be true because it expresses the chaotic conditions, thereby accepting the false position that art must always be only an expression of its time.
The position taken by Ernesto Graditi seems to be summed up in these masterful thoughts of H. Sedlmayr, in “Loss of the Centre”: “The art is” an expression of time “only from an accessory and essentially timeless point of view : it is” epiphany “of all that is independent of time, of what is outside the reflection of the time. The denial of this character of eternity is, essentially, even the negation of art. And it is also true that “the mediocre talent is always a prisoner of time and it has have to feed those elements existing in it” (Goethe). The production of the true artist doesn’t come from the time, it grounds the temporary prison to become creation. And it ‘s certain, however, that in order to create the new, it must also make use of the temporal elements. This reasoning, applied to our time, means that the artist is faced with the task of “show with images of the disturbed natural order the never troubled supernatural order” (J. Schoning).

Therefore, the greatness of the artist “is not measured according to the good feelings it arouses, but [Nietzsche, in theory, he knew] according to the security with which the chaos obeys his commands.” And the artist receives these commands not from an “I” alone, but “from above”, and when it doesn’t receives them from above, he receives them precisely from below….” The pictorial cycle of “Death and Resurrection”, which Ernesto Graditi is working, is a good summary of visual storytelling and artistic depth on this momentous issue.